Review: The Confession by Charles Todd 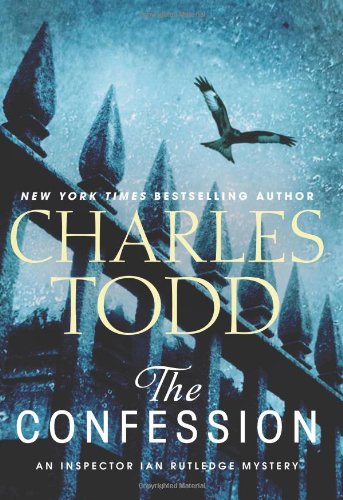 Scot­land Yard’s best detec­tive, Inspec­tor Ian Rut­ledge, must solve a dan­ger­ous case that reaches far into the past in this superb mys­tery in the acclaimed series

Declar­ing he needs to clear his con­science, a dying man walks into Scot­land Yard and con­fesses that he killed his cousin five years ear­lier dur­ing the Great War. When Inspec­tor Ian Rut­ledge presses for details, the man evades his ques­tions, reveal­ing only that he hails from a vil­lage east of Lon­don. With lit­tle infor­ma­tion and no body to open an offi­cial inquiry, Rut­ledge begins to look into the case on his own.

Less than two weeks later, the alleged killer’s body is found float­ing in the Thames, a bul­let in the back of his head. Search­ing for answers, Rut­ledge dis­cov­ers that the dead man was not who he claimed to be. What was his real name—and who put a bul­let in his head? Were the “con­fes­sion” and his own death related? Or was there some­thing else in the victim’s past that led to his murder?

The inspector’s only clue is a gold locket, found around the dead man’s neck, that leads back to Essex and an insu­lar vil­lage whose occu­pants will do any­thing to pro­tect them­selves from noto­ri­ety. For noto­ri­ety brings the curi­ous, and with the curi­ous come change and an unwel­come spot­light on a centuries-​​old act of evil that even now can damn them all.

I love a good mys­tery and when I started this, I likened him to a good Wilkie Collins story, how­ever, by the time I was fin­ished, I couldn’t wait to put the book down and in some ways for­get I ever read it.  I know that maybe if I was a fan of the series or had read some of the other books, this may have been dif­fer­ent, but what started out as a good poten­tial story, it fal­tered and failed.

Ian Rut­ledge is the epit­ome of a Scot­land Yard detec­tive.  He’s smart, polite, always a gen­tle­man, dis­crete, a pro­fes­sional, and gets the job done.  At the start, I thought this might be like the TV series Jeri­cho with Robert Lind­say, and in some ways it was.  Jeri­cho only lasted four episodes and it clearly needed to con­tinue to really delve into who Jeri­cho was and his past, which is some­thing I felt was needed with Rut­ledge as well.  Per­haps with the oth­ers in the series, there would have been a slow pro­gres­sion of char­ac­ter devel­op­ment, but I can­not speak to that not hav­ing read any others.

Rut­ledge is also haunted by his fallen friend, Ham­mish, who I feel is meant to add to the story, but mostly dis­tracted the reader since his Scot­tish dialect is some­times not easy to deci­pher. I’m sure there is prob­a­bly more back­ground as well on Rut­ledge in the ear­lier books, but com­ing into the series mid­way, the reader finds them­selves encoun­ter­ing a semi-​​developed char­ac­ter that doesn’t really grow or change any through the entire book.

The story has some good ele­ments, a town with many secrets, a fam­ily with many skele­tons in their closet, and a mur­der mys­tery to kick it all off.  From the first though this story takes these good ele­ments and drags out the events to the point where you’re almost bored to tears.  After the mid-​​point in the story, it seems as though Rut­ledge spends all his time in the car going from Lon­don to the coastal town and back and forth and back and forth.

Until the last few chap­ters, you know exactly what Rut­ledge knows allow­ing you to come to your own con­clu­sion as to what is going on and who the mur­derer is, that is until he gets really close to fig­ur­ing it out, then the authors decide that all that open­ness with the reader needs to stop so they can spend a lit­tle more time build­ing up to the big finale which in the end, isn’t worth all the build up.

The other major issue with this book is the char­ac­ters are much to easy to con­fuse.  The names are very sim­i­lar, and while you never actu­ally meet more than half a dozen of the char­ac­ters the mur­der mys­tery revolves around, that makes it all the harder to keep them straight.

All in all, if you’re a fan of the series, you may enjoy this book.  If you’re not, I would sug­gest giv­ing another in the series a shot as this one felt very unde­vel­oped and the oth­ers may be bet­ter.  As for me, I doubt I will read another book by Todd.