Browse: Home / Review: The Curious Case of the Clockwork Man by Mark Hodder

Review: The Curious Case of the Clockwork Man by Mark Hodder 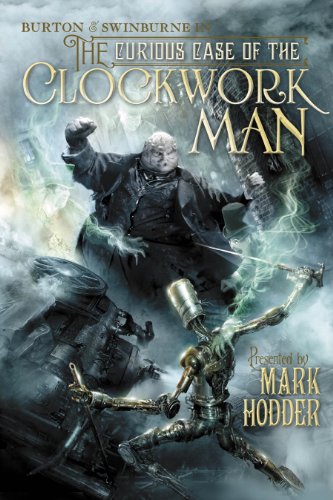 Time has been altered, and Sir Richard Fran­cis Bur­ton, the king’s agent, is one of the few peo­ple who know that the world is now careen­ing along a very dif­fer­ent course from that which Des­tiny intended.

His inves­ti­ga­tion leads to involve­ment with the media sen­sa­tion of the age: the Tich­borne Claimant, a man who insists that he’s the long lost heir to the cursed Tich­borne estate. Mon­strous, bloated, and mono­syl­labic, he’s not the aris­to­cratic Sir Roger Tich­borne known to every­one, yet the work­ing classes come out in force to sup­port him. They are soon riot­ing through the streets of Lon­don, as mys­te­ri­ous steam wraiths incite all-​​out class warfare.

From a haunted man­sion to the Bed­lam mad­house, from South Amer­ica to Aus­tralia, from séances to a secret labyrinth, Bur­ton strug­gles with shad­owy oppo­nents and his own inner demons, meet­ing along the way the philoso­pher Her­bert Spencer, Isam­bard King­dom Brunel, Flo­rence Nightin­gale, and Charles Doyle (father of Sir Arthur Conan Doyle).

Can the king’s agent expose a plot that threat­ens to rip the British Empire apart, lead­ing to an inter­na­tional con­flict the like of which the world has never seen? And what part does the clock­work man have to play?

Hod­der recently won the Phillip K. Dick Award for the first in this series, The Strange Affair of Spring-​​Heeled Jack, and it is no won­der that this is a wor­thy follow-​​up to the first book.  The story con­tin­ues the tale of Sir Fran­cis Bur­ton, and his pals, as they become involved in the mys­te­ri­ous miss­ing dia­monds.  The title char­ac­ter, one Clock­work Man, starts off this adven­ture, but other than a bit part, he doesn’t play too heav­ily into the story.  This is some­thing I would have liked to see change.  How­ever, Hodder’s skill at draw­ing a reader in to the story allows you to quickly for­get that this isn’t the story you thought it was going to be.  It is all the bet­ter for that.

The events of the first book have changed things in Burton’s Eng­land when this story picks up and Hod­der del­i­cately weaves the two together into one won­der­ful story.  I can only hope the third in the series, which recently arrived on my doorstep, will round out this three­some into a won­der­fully intrigu­ing tale.  Rem­i­nis­cent of a Wilkie Collins mys­tery or a good Sher­lock Holmes story, even if you are not a huge fan of steam punk, these are books worth read­ing.  Hod­der brings the world of Bur­ton and Swin­burne to life through the use of illu­mi­nat­ing descrip­tions, and famous and infa­mous names from his­tory, which only draw you deeper and deeper into his world.

Hod­der leaves the sec­ond book at the per­fect point.  I couldn’t wait to get my hands on the third in the series, and I believe that Hodder’s abil­ity to weave the three inde­pen­dent sto­ries together so that they are at once their own book, and part of a whole makes this series one of the best I’ve read in a while.

One response to “Review: The Curious Case of the Clockwork Man by Mark Hodder”